Building Regs Reforms: Digging Down Into The Detail

As Storm Darcy causes disruption across the UK, the Government’s ongoing review of the building regulations was never going to be a short, simple task but dare I say it is becoming as lengthy as Jane Austen’s Pride & Prejudice.

The plot to uplift Parts L and F of the Building Regulations began back in 2019 with the first part of the Government’s two stage Future Homes Standard consultation. The long-awaited response to this document has now been published by the Ministry for Housing, Communities & Local Government (MHCLG) and confirmed an uplift to mandate a 31% carbon saving from new builds from 2021.

This carbon saving was the more ambitious option of the two uplifts proposed within the 2019 consultation and will encourage the use of both thermal efficiency and low carbon heating. In practice, developers are expected to meet this through tightening fabric standards, on-site generation like PV, fitting energy saving measures like wastewater heat recovery or installing low carbon heat. As implied within initial proposals, heat pumps are anticipated to be the primary heating system in new homes – a decision supported by 70% of consultation respondents who agreed that heat pumps have a key role to play in the delivery of the Future Homes Standard.

Other initial proposals have however been pushed back. The Government had threatened to remove the ability of local authorities to set higher energy efficiency standards for new homes, for example, but has instead deferred its decision until later this year. The retention of these powers will allow local authorities, the majority of which have declared a climate emergency, more flexibility to take action on climate change, although it is too early to celebrate just yet.

Another notable change is that transitional arrangements will only apply to individual buildings rather than an entire site. Developers need to submit building emission notices or deposit plans by June 2022 and then commence work on each individual house by June 2023. Therefore, if a developer submits plans for a site with 50 plots before June 2022, but only commences work on 30 of them by June 2023, then those other 20 will have to comply with the new regulations. Furthermore, transitional arrangements won’t apply to notices or plans submitted after June 2022, and developers will have to comply with the new regulations.  Whilst this doesn’t address historical exploitations of land banking, it will go some way to mitigating it in the future.

The 2021 uplift will also introduce requirements to mitigate overheating in new homes and non-domestic buildings. This goes further than the Welsh Government’s plans by including care homes and student accommodation in addition to houses and flats. The requirement for overheating is met by designing and constructing the building to limit unwanted solar gains and by removing excess heat. Given the UK’s net zero commitment, the use of air conditioning is not expressly prohibited but discouraged as it uses additional energy within the home. Instead, the Government has advised that any installation of mechanical cooling be compensated with additional energy efficiency measures to improve the buildings SAP score.

Standards for existing homes are also set to change with new guidance released to prevent under or oversizing of appliances for space heating, domestic hot water and mechanical ventilation. The 2016 Each Home Counts Review stressed the importance of traceability and accountability in improving the sector’s reputation. We welcome the introduction of a commissioning sheet to inform homeowners what work has been undertaken and on system performance. It is significant that this is being rolled out across both new and existing homes, as this should drive out unscrupulous tradespeople and help deliver greater quality assurance.

Looking further out, the Future Homes Standard will come into force from 2025 with technical details expected in 2023. This mandates that new homes be built to produce 75-80% less emissions than currently and will prohibit the installation of gas central heating. The latter point is unsurprising given the Government plans to phase out the Fuel Poverty Network Extension Scheme and prohibit future connections to the gas network.

Alongside this will sit a Future Buildings Standard for the non-domestic sector which mandates the use of low carbon heat, drawn primarily from heat networks, heat pumps and direct electric. In the interim, the 2021 uplift to the building regulations proposes a 27% reduction in carbon emissions compared to buildings built to current standards. The uplift will increase minimum seasonal efficiencies for gas boilers in new build, introduce mandatory heat loss calculations to prevent oversizing and mandate the use of thermostatic radiator vales. In addition, the Government plans to futureproof the sector for low carbon heat by mandating flow rate temperatures of 55°C or lower.

On the ventilation side, the uplift will bring minimum efficiencies for cooling systems up to the current EcoDesign standards but will go significantly beyond these for split and multi split air conditioners, and variable refrigerant flow systems. As ever, the devil is in the detail with these consultations, and with 132 questions to consider, the industry must work together if it is to shape the Government’s thinking.

A blog by Jade Lewis.

If you have any inquiries regarding this article, please contact info@sustainableenergyassociation.com.

This article was originally published in H&V’s Digital Edition for March 2021. 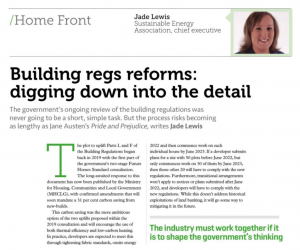 Manage Cookie Consent
To provide the best experiences, we use technologies like cookies to store and/or access device information. Consenting to these technologies will allow us to process data such as browsing behaviour or unique IDs on this site. Not consenting or withdrawing consent, may adversely affect certain features and functions.
Manage options Manage services Manage vendors Read more about these purposes
View preferences
{title} {title} {title}